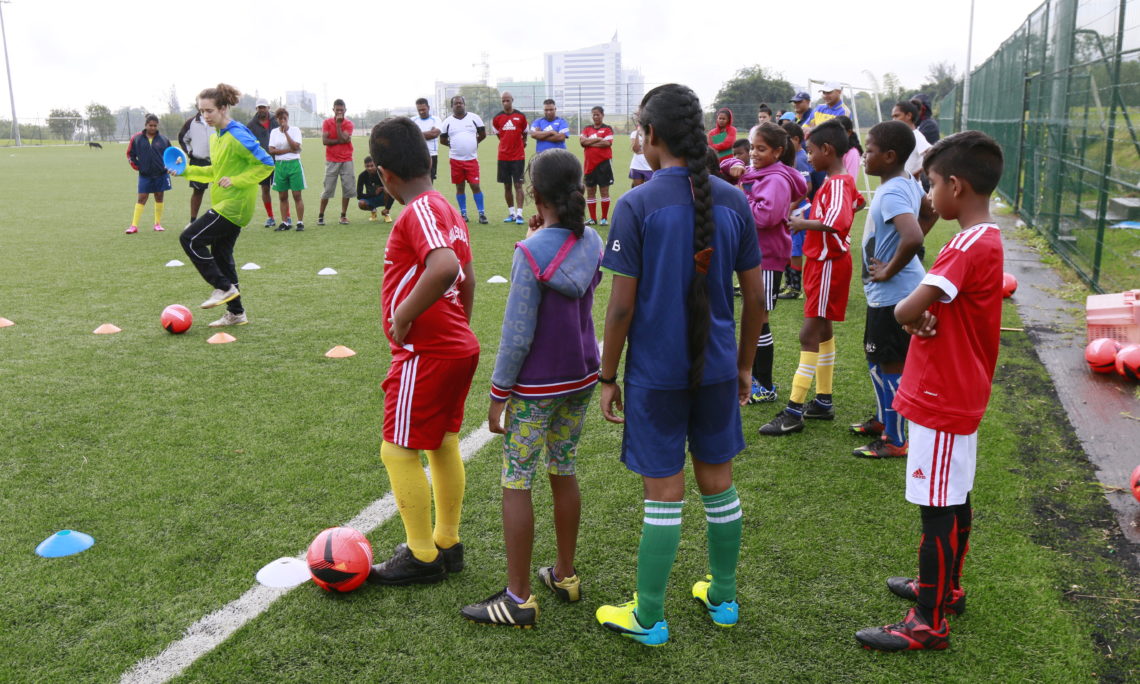 Kelsey’s program kicked off on July 30, where at the invitation of our partners and collaborators – the Ministry of Youth and Sports and the Mauritius Football Association – she attended the final of the Council of Southern Africa Football Associations (COSAFA) Men’s Under -17  Championship.  Our soccer envoy hit the pitch on Monday, July 31 with a workshop and practical session for 20 soccer coaches from grassroots clubs across the island. None of the coaches who attended the workshop had previously been exposed to an international soccer trainer. The pace was set. From July 31 to August 5, Kelsey Perlman led 10 soccer clinics with young players – boys and girls – aged between 9-17 years old – from various regions of Mauritius.  In addition to training more than 200 young soccer enthusiasts, Kelsey was the guest of honor at a mini-tournament for the Under 15 girls and Under 17 boys on August 4 where she had the opportunity to designate the two best players of the tournament.  She received kudos from the Ministry of Youth and Sports and the Mauritius Football Association who were impressed by her skills, knowledge, experience, expertise and interpersonal skills to connect with all levels of Mauritian society.  Knowing the passion which Mauritians have for soccer and the English Premier League, the Chargé d’Affaires Dr. Melanie Zimmerman concluded Kelsey’s program with a viewing of the Community Shield which marks the beginning of the English Premier League at the her residence on August 6.

Kelsey’s program in Mauritius promoted gender equality, cohesion and the benefits of soccer for professional success to government entities, sports clubs and youth groups.  Her visit highlighted not only the popularity of soccer in Mauritius but this sport’s capacity to unite people from all backgrounds, regardless of their differences. The week-long program that she led with young and senior football players was an affirmation that over and above the competitive nature of the sport, football allows the younger generation to socialize, and be introduced to the fundamental values of collective bonding —- a feature which speaks volumes to the multifaceted and multiracial Mauritius.