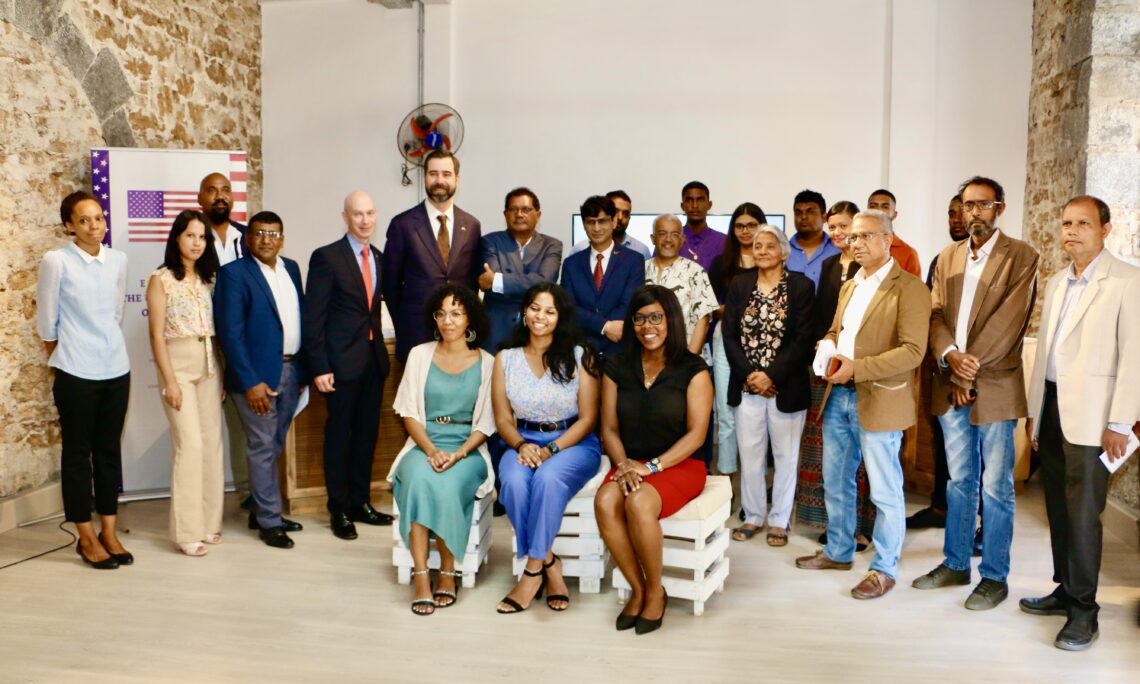 September 23, 2022: The Intercontinental Slavery Museum launched a project to renovate the building’s roof. The project is being funded through the U.S. Department of State Ambassadors Fund for Cultural Preservation. A ceremony was held at the Museum this morning, Friday, September 23, for the launch. U.S. Embassy Acting Deputy Chief of Mission Andrew Kelly and the Chairperson of the Intercontinental Museum, Jean Maxy Simonet, gave remarks at the event.

Mr. Kelly noted that, “Preservation of historic sites is an important way to transmit our understanding of the past to future generations. The project to renovate the roof of the Intercontinental Slavery Museum was selected from among 172 applications to the Ambassadors Fund for Cultural Preservation. The United States is honored to support this renovation project.” Read full remarks here.

Jean Maxy Simonet highlighted the importance of the roof renovation to Mauritius: “This project is the second most important conservation project undertaken by the Government of Mauritius on the island, namely the conservation of the former Military Hospital which was once one of the most impressive buildings in the capital city of Port Louis.” He highlighted the “long history of cooperation” between the United States and the Republic of Mauritius. “Both the United States and Mauritius have similar histories of immigration, colonization and slavery and we both continue to endure the multiple legacies of slavery. Most importantly, the US will be aiding the future Intercontinental Slavery Museum in empowering local communities and in particular those of Afro-Malagasy descent. Reviving a skill that has long been forgotten will contribute to highlighting the economic and cultural contribution of Afro-descendants to the building of the colonial infrastructure of the island.”

The Intercontinental Slavery Museum, located at the site of a former Military Hospital in Port Louis, was selected as a recipient of the Ambassador’s Fund for Cultural Preservation in 2021 for the renovation of a roof to the amount of $39,275 (approximately Rs1.7million). Not only is the Intercontinental Slavery Museum a former Military Hospital, but it is also the oldest building in Mauritius, dating from 1740. The site has immense significance for the history and legacy of the slave trade in Mauritius.

The funding will be used to conserve the two rooms at the entrance of the Military Hospital using traditional 18th century roofing techniques known as ‘argamasse’ from a specially trained pool of artisans. Part of the project aims at empowering young people from disadvantaged backgrounds to gain valuable skills and knowledge in the conservation of heritage buildings. The two rooms will be converted as a ticket office and a gift shop for the Museum, which will enable visitors to appreciate the beauty of 18th century Mauritian architecture.

The United States is proud to support the revival of traditional craftsmanship that has been lost since the 19th Century. This project ensures that the Intercontinental Slavery Museum does justice to the history and memory of the hundreds of slaves associated with the building. More importantly, this project contributes to the promotion of inclusive economic growth, innovative partnerships, and support for human dignity by providing training to young persons, especially from disadvantaged groups.