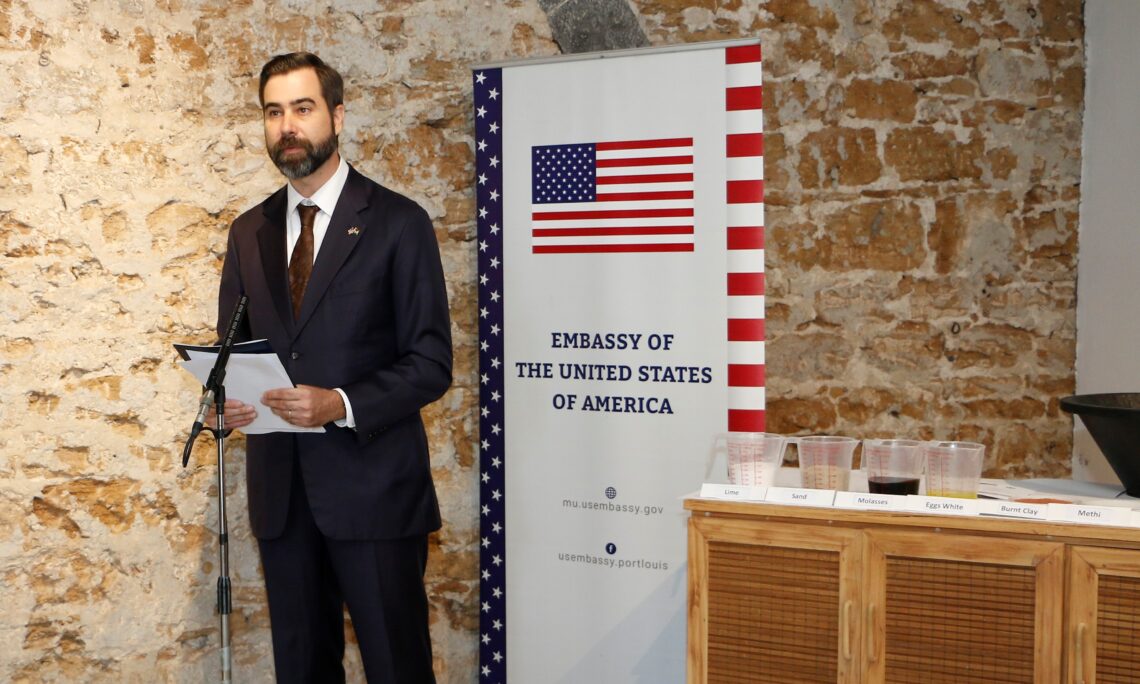 It is a privilege to be with you today.  The saga of Mauritius, like the saga of America, is fundamentally a story of how different peoples came together to form a new nation.  We are rightfully proud of this history, and the important role of our ancestors in creating tolerant, democratic, and pluralistic societies that reflect the richness of the different cultures and countries from which they came.

The details are different, but the story is remarkably similar for both our countries. The Dutch, French, and English competed for political supremacy, as settlers from those countries gave way to subsequent waves of immigrants seeking a better life for themselves and their families.  As a new society grew, so did the desire for the people to exercise self-government, a desire that was realized in the establishment of self-governing, multi-ethnic republics.

But this is not the entire story.  Our history also includes the dark and inescapable truth that many who came to our young countries did not come seeking a better life, but were brought against their will.  Human beings were enslaved and torn from their homes.  Families were divided. Societies were destroyed.  Histories were erased.  Because it is unpleasant to reflect on such things, too often we fail to acknowledge the brutal legacy of slavery, and the degree to which the economic and social systems of our societies depended on the labor of people who were not free.

By failing to reflect on this tragic aspect of our history, we also run the risk of failing to acknowledge how much our culture has been enriched by the contributions of our African forefathers and foremothers and their descendants down to the present day.  These contributions can be seen throughout our day to day lives, and especially in their influence on the rituals and practices that make life worth living; in our food, in our songs, in our dance, and even in the very words we use to communicate.

The Intercontinental Slavery Museum, which is in an ancient hospital that once served settler, slave, and indentured servant, is both a tangible link to those that came before us, and an invaluable steward of cultural preservation.  Preservation of historic sites like this is an important way that we ensure future generations understand the totality of our history, including the tragedy of slavery.

The United States is proud to support the preservation of this important site, by providing a grant of 1,750,000 rupees to renovate the roof of this nearly 300-year-old structure, as part of the Ambassadors Fund for Cultural Preservation.

U.S. missions in 133 countries around the world have used this fund to support the preservation of important cultural and historical sites.  In Mauritius, we are honored to have two projects which are currently funded under the Ambassadors Fund for Cultural Preservation:  a conservation plan at Bras d’Eau, led by the Aapravasi Ghat Trust Fund; and the renovation project, here, at the Intercontinental Slavery Museum.

The Ambassadors Fund for Cultural Preservation is a highly competitive program. In 2021, the fund selected ISM Ltd. as a recipient of the grant to complete the renovation we are celebrating today.  I would like to take a moment to congratulate the staff of ISM Ltd. and their counterparts for their efforts in putting together a very good proposal and for their commitment to this project.

As the first museum of its kind in the region, it is our hope the Intercontinental Slavery Museum will serve as a platform for teaching about the history and legacy of slavery, to include fruitful collaboration with other African countries and beyond.

To close, I would like to quote one of America’s greatest statesmen and civil rights advocates, Frederick Douglas.  Born into slavery, Douglas escaped from bondage and went on to become a counselor to Abraham Lincoln and subsequent presidents.  An abolitionist, orator, author, as well as the most-photographed person of the 19th century, Douglas played an important role in the abolishment of slavery and the establishment of laws to protect the civil rights of all Americans.  Throughout his life he often reflected on the vicious absurdity of the idea that one man could own another, along with his deeply held conviction that knowledge and freedom walk hand in hand.  In the words of Douglas:

““No man can put a chain about the ankle of his fellow man without at last finding the other end fastened about his own neck. Knowledge makes a man unfit to be a slave.”

Again, thank you for inviting me today.  I look forward to visiting again at the opening of the Museum.