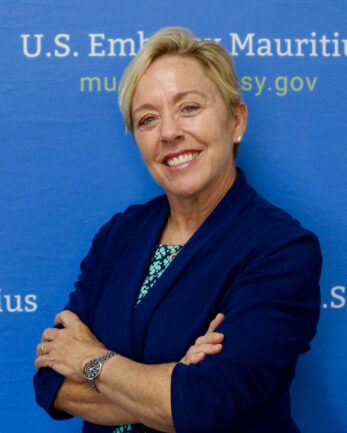 Prior to that, she served as Deputy Executive Director in the Bureau of Administration from 2010 to 2012 and as a Pearson Fellow for United States Senator Richard Durbin (D-Ill) for a year.  Judes was also a Special Assistant to Under Secretary for Management Patrick F. Kennedy from 2007 to 2009.

Judes was Chief of Protocol to Ambassadors Khalilzad and Crocker in Baghdad, Iraq, and preceding that served as Management Officer in Bujumbura, Burundi, and Naples, Italy. She began her career in Georgetown, Guyana.

Before joining the State Department, Judes was a professional ski instructor in Vail, Colorado, and owned a successful landscaping business. She attended Calvin College in Grand Rapids, Michigan, and has an MBA and Masters of Fine Arts in Art History from the University of Denver in Colorado. She is originally from Whittier, California, and is married to Daniel DeBaere.  They have three lovely children and a Vizsla.

For American Citizen Services, please contact the U.S. Consular Agency in Victoria, Mahé, via email at ConAgencySeychelles@state.gov or on (248) 422 52 56 on Tuesday, Wednesday and Thursday from 8:30 to 12:30.