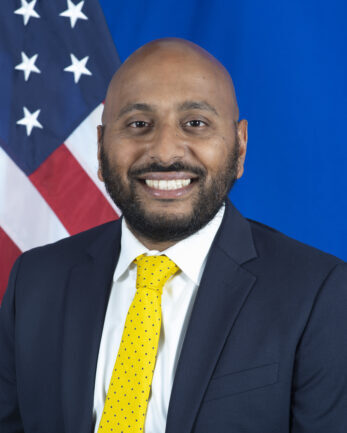 Satrajit (Jitu) Sardar is a career foreign service officer and the incoming Chargé d’Affaires to the U.S. Embassy in Mauritius and the Seychelles.

Most recently, he concluded an assignment as Deputy Director in the Bureau of African Affairs Office of East African Affairs, where he oversaw a staff of 10 desk officers in advancing U.S. priorities with 13 countries in east Africa.  Prior to this assignment, Jitu was a legislative fellow working in the Office of Senator Edward Markey.  He has also served as Deputy Communications Director in the United States Mission to the United Nations, Public Affairs Officer in the U.S. Embassy in Burma, and Embassy Spokesman in the U.S. Embassy in the Democratic Republic of Congo.  As the chief of the Embassy’s Eastern Congo Unit from 2011 to 2012, he coordinated the first reports and observations on the “M23” rebellion.

He holds a B.A. from Rice University and a Masters in International Relations from the Maxwell School at Syracuse University.  His wife, Janet Ousley, is a public health professional who works for the medical humanitarian organization Doctors Without Borders.